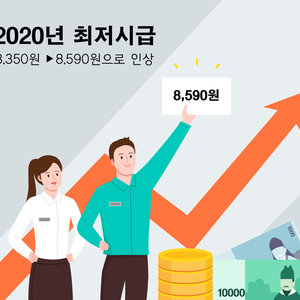 The relatively small increase has also made it difficult for President Moon Jae-in to fulfill his campaign pledge of increasing the wage to 10,000 won by 2022, the last year of his term.

Early Friday morning after 13 hours of final negotiations, the 27-member Minimum Wage Commission, a trilateral panel formed of nine representatives each from labor, management, and the public, voted on the wage increase rate.

Between 8,590 won and 8,880 won proposed by the management and labor, respectively, 15 selected the former, while 11 voted for the latter, with one abstention.

The minimum salary is the lowest possible hourly pay a local worker is entitled to receive.

The lowest increase rate in a decade displays diverse criticisms that the rapid raises in the last two years have led to small businesses firing employees or decreasing their working hours, rather than the primary goal of boosting consumption.

As concerns were built not only by business lobbies but also by politicians ― even among officials of the ruling bloc ― the Moon government indicated flexibility in reaching the 10,000 won pledge.

“This is the result of self-reflection on our difficult economic situation,” Park Joon-shik, head of the council, said in a briefing at the Government Complex Sejong after the decision. “It reflected the consensus for the need for a flexible response to the situation.”

Under the law, the labor minister will finalize and state the wage level by Aug. 5 following the commission’s conclusion. To that time, those opposing the conclusion can request a review.

Unions, which were not content with the 8,590 won increase, said they will make such a request.

The Federation of Korean Trade Unions described the increase as a “failure,” saying it was the lowest increase since the 2.7 percent set in 1998 following the Asian financial crisis, and 2.75 percent in 2010 after the global financial crisis.

“The Moon government’s campaign to recognize labor, realize a 10,000 won minimum salary, and resolve economic polarization has become hollow,” it said in a statement.

The Korean Confederation of Trade Unions also vowed to oppose the verdict, which it said was virtually a cut in the minimum wage.

“The agreement is the administration’s declaration to abolish its income-driven growth,” the umbrella union said in a statement.

The business circle, which hoped to decrease or at least stop the minimum wage, said the 2.9 percent rise was regrettable but seemed inevitable.